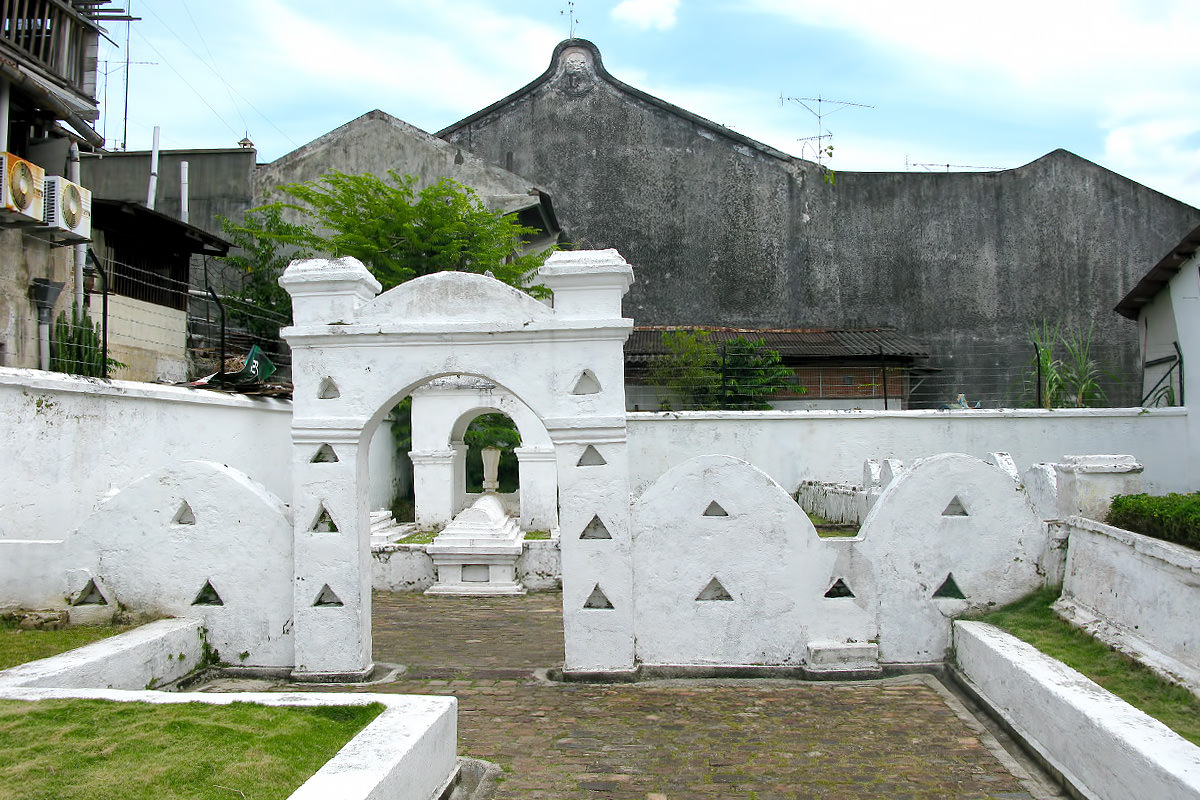 Hang Jebat Mausoleum is a burial ground along Jalan Kampung Kuli in Malacca dedicated to the legendary warrior Hang Jebat. Also known as Makam Hang Jebat, the crypt clearly predates the 1512 Portuguese occupation, but its exact date of construction (as well as its authenticity) remains a mystery.

The well-maintained grave is an Acehnese-style tomb usually used to mark the burial grounds of sultans and high-ranking ministers. Jawi writings above the front entrance of the crypt mark it as the ‘actual’ burial ground of Hang Jebat: but there is another crypt in Terendak Camp, an army base northwest of the state billed as Hang Jebat’s final resting place as well.

According to the Sejarah Melayu (Malay Annals), Hang Jebat was a high ranking Malay warrior who was part of a legendary quintet that included Hang Tuah, Hang Kasturi, Hang Lekiu and Hang Lekir. He defied the Sultan when fellow warrior and sworn brother, Hang Tuah was falsely accused of seducing the Sultan’s favourite dayang (consort).

The angry sultan ordered Hang Tuah’s immediate execution upon hearing the rumours. The executioner, the wise Bendahara Tun Perak, whom Hang Tuah and his band of warriors had saved many years ago, knew that he was innocent and simply chained Hang Tuah to a tree instead of slaying him.

Realizing that Hang Tuah was the only one able to defeat Hang Jebat, an almost invincible warrior skilled in the martial arts of silat, the sultan lamented his swift death sentence. Bendahara Tun Perak then happily revealed that he had not slain Hang Tuah and the overjoyed king ordered his return and pardoned him.

Hang Tuah returned but when he found his pardon came at the expense of fighting his sworn brother he was dismayed. On the day of their fatal match Hang Jebat revealed that he had rebelled because of the false accusations against Hang Tuah. This caused Hang Tuah great remorse as he had not wanted his brother to revolt for him.

Being a faithful soldier Hang Tuah dared not disobey the direct order of his sultan. Before they duelled Hang Jebat asked that he be allowed to wreak havoc on the kingdom for 24 hours as a sort of goodbye ode. Hang Tuah agreed and the next day in a duel of honour that lasted three days and nights, they battled and Hang Tuah (the superior fighter) won.

Though Hang Jebat was ultimately branded a traitor he was acclaimed as a champion of justice because he stood up against a monarch for his brother, Hang Tuah.